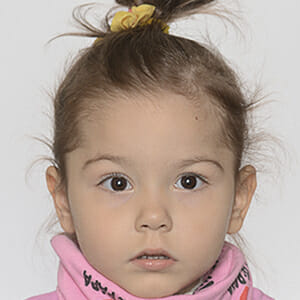 Esophageal atresia often occurs with tracheoesophageal fistula, a birth defect in which part of the esophagus is connected to the trachea, or windpipe.

It is a history about a small fighter – Aliaksandra.

Right after the birth the girl had an awful diagnosis  – Esophageal atresia (III typ). Esophageal atresia (EA) is a rare birth defect in which a baby is born without part of the esophagus (the tube that connects the mouth to the stomach). Instead of forming a tube between the mouth and the stomach, the esophagus grows in two separate segments that do not connect. In some children, so much of the esophagus is missing that the ends can’t be easily connected with surgery.

Endless investigations, therapies and new diagnoses – so looks the life of the three-year-old girl . In spite of heavy diagnosis the parents and Aliaksandra don’t lose the courage: they have hope, and this hope gives them strength to fight against serious disease. This hope is called „child hospital in Boston“. American doctors have already agreed to help the girl. 3 operations are necessary for it. But the costs for the treatment are too high – 407 587 USD.

“We need an operational treatment. We ask all people to render a financial support to our daughter Sasha. It is simply vital to perform 3 operations, but the sum is very big and we can’t independently collect such impressive sum.” — Maria, Sasha’s mother shares.