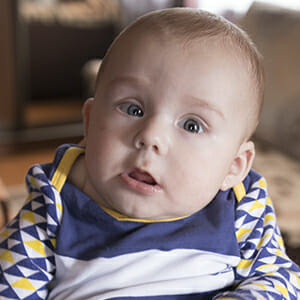 A brachial plexus injury (BPI), also known as brachial plexus lesion, is an injury to the brachial plexus, the network of nerves that conducts signals from the spinal cord to the shoulder, arm and hand. Signs and symptoms may include limp or paralyzed arm, lack of muscle control in the arm, severe pain

In March 2017, parents of Gleb Bekarevich asked for help. The boy has complete paralysis of the right half of the body. The microsurgical reconstruction in Yaroslavl has given its positive results – the boy can move better. But Gleb needs postoperative care at the International Institute of Functional Reconstructive Microsurgery.

The mother of a four-month-old baby who lives in Krichev has asked us for help.

“Pregnancy proceeded well, only at the 39th week I had a high BP and was sent to Mogilev for pregnancy maintenance. When the doctors explained me the consequences of my high pressure for the child, I agreed to induce labor. The childbirth was long and painful, but now I have a son!”

Gleb is an inquisitive and cheerful boy, who often smiles and communicates in his own way. The parents are haunted by the only problem – Gleb cannot move his right arm at all. Since birth the boy, just like Dima Fomyuk, gets the treatment that includes acupuncture, paraffin, electrophoresis, massage. But nothing gives the desired effect: the child grows and the arm is becoming retarded.

“During the last hospitalization in the Republican Scientific Center of Neurosurgery and Neurology, the head of the department advised us the surgery in Yaroslavl. The first stage of the surgery has already been planned on the 30th of March, but all in all Gleb needs two stages of the surgery. The costs are too high, it’s impossible to collect such an amount of money for us. I want to thank you in advance for the chance for my son to grow up healthy and live a full life!”