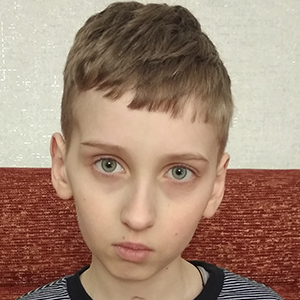 consequences of spontaneous cerebral hemorrhage due to rupture of brain arteriovenous malformation. Psychoorganic syndrome with speech and movement disorders

An intracranial aneurysm, also known as a brain aneurysm, is a cerebrovascular disorder in which weakness in the wall of a cerebral artery or vein causes a localized dilation or ballooning of the blood vessel.

Psychoorganic syndrome (POS), also known as organic psychosyndrome, is a progressive disease comparable to presenile dementia. It consists of psychopathological complex of symptoms that are caused by organic brain disorders that involve a reduction in memory and intellect.

course of rehabilitation treatment at the Research Institute of Emergency Pediatric Surgery and Traumatology (Moscow, Russia)

Nikonovich Dmitry lived an ordinary life until he had a cerebral hemorrhage on 04.08.2020, when his congenital aneurysm burst. The injury was so serious that the doctors had to perform craniotomy and put the boy into coma. After Dima was brought out of the coma his left side was paralyzed, his vision also deteriorated – there was a detachment of the retina.

In this regard, Dima needed to undertake a course of rehabilitation treatment. The boy’s parents turned to the Research Institute of Emergency Pediatric Surgery and Traumatology in Moscow. In autumn 2020, Dima undertook an incomplete course of the treatment. The fact is that after the examination (computed tomography), the doctors found out that they had to manufacture an individual titanium plate and to perform an operation to install it. The operation was successful.

Dima returned home and began to gain strength after the operation. His family fully and independently paid all expenses: travel, accommodation, treatment.

At the moment the boy needs to continue the course of rehabilitation treatment at the Research Institute of Emergency Pediatric Surgery and Traumatology in Moscow.

The cost of treatment is 4 990 USD. The Nikonovich family asks all caring people to help them.