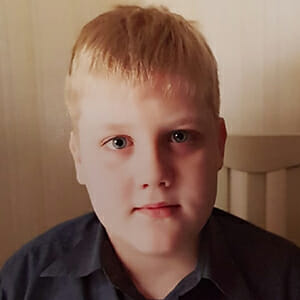 Congenital syndromes are characterized by fatigable weakness of skeletal muscle (e.g., ocular, bulbar, limb muscles) with onset at or shortly after birth or in early childhood; rarely, symptoms may not manifest until later in childhood. Cardiac and smooth muscle are usually not involved. Severity and course of disease are highly variable, ranging from minor symptoms to progressive disabling weakness.

This disease is manifested by muscle weakness. Ilya can do everything: run, jump, climb, swim. Only he gets tired very quickly. And most of all, his legs are tired. First the gait changes, then the boy starts swinging when walking. It ‘s getting harder for him to go… If Ilya doesn’t sit down, he could easily fall and will no longer be able to rise. The muscles weaken so they just don ‘t work. But after the rest everything is restored.

« Any trip starts with thinking about the route: how far we can go, how long it will take to rest, etc. Despite being 10 years old, Ilya doesn’t walk in the street unsupervised. His hands are also in pain. Because of this, it is difficult for the son to write in school for a long time. All this extremely prevents Ilya from fully developing, learning, living… », —Eugenia, Ilya ‘s mother shares.

At the moment Ilya can go only 100 meters without rest. Then the “weariness” is in evidence and also it grows. Banal things as going to the polyclinic, to school and other –  all should be planned in advance.

The boy receives therapy with anticholinesterase medicaments, but it has small effect. Doctors recommended Ilya following thing: intake of medication Firdapsу, but it cost is too  much for Shkoda ‘s family —  52 740 USD.

Parents are unable to collect such sum on their own.

Only together we can help Ilya to host a fulfilling life!