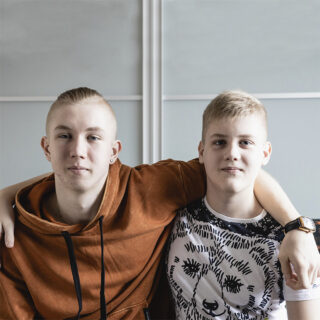 Congenital (congenital) myasthenic syndrome caused by a compound-heterozygous mutation in the CHAT gene, involving the muscles of the extremities

Congenital myasthenic syndromes (CMS) are a group of hereditary neuromuscular diseases caused by a genetic defect in one or more specific pathophysiological mechanisms that ensure the reliability of the transmission of excitation from the nerve to the muscle.

purchase of Firdaps for 6 months

When Ivan Skoda was a year old, the parents suspected something was wrong: the child had just begun to walk, but the gait was strange, waddling. In search of a diagnosis, the family went through a lot of doctors – from an orthopedist to a neurologist, numerous examinations in hospitals.

Born in 2009, the youngest son, Ilya, began to show the same symptoms as his older brother. And only in 2019, doctors suggested the presence of a genetic disease, the symptoms of which are slightly more pronounced in the youngest son. Parents at their own expense made a genetic analysis, which confirmed the diagnosis. At the beginning of 2020, doctors recommended taking the expensive drug Firdaps, which helps the nerve impulse from the brain to get to the muscle. From the first months of taking the drug, the boys’ condition improved significantly – they were able to go to school on their own and lead a normal life. With the help of Unihelp ICPA, thanks to donations from our benefactors, children received the drug for 2 years, and their parents interacted with government agencies all this time so that the drug was purchased at the expense of budget funds.

“Three consultations took place, which confirmed the effectiveness of the medication and the expediency of continuing treatment. But the official response of the Ministry of Health says: since the drug is not registered in the Republic of Belarus, is not included in the Republican formulary, the list of essential medicines and clinical protocols, providing patients with it “can be carried out only on a paid basis at the expense of personal funds or other not prohibited by law. sources.” One package of the drug costs 2900 euros, two children need two and a half a month. We simply do not have such “personal funds”. We will continue the dialogue with government agencies and hope that we will be able to resolve the issue of providing Ivan and Ilya with medicine. But for now, there is nothing left for us but to ask you again for help!” – Evgenia Skoda, mother of Ivan and Ilya, addresses all friends of Unihelp.