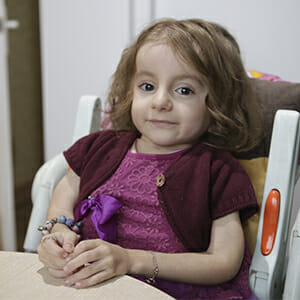 Brittle bone disease is a genetic bone disorder characterized by fragile bones that break easily. It is caused by a faulty gene that reduces either the amount or the quality of collagen – a protein in a body that forms and strengthens bones

Kira Lameika is often called a crystal princess because of her fragile, glasslike, bones. It is a story about wonderful parents, an everyday struggle and the ability not to give up.

“There was no cause for concern during the pregnancy: everything seemed to be within normal limits. According to medical indications caesarean section was necessary. This decision turned out to be momentous one. Now it’s hard to imagine, to what consequences natural birth could lead”.

In the National Research Center “Mother and Child” the girl was diagnosed with brittle bone disease (Osteogenesis imperfecta).

At that time Victoria was only 23 years old, her husband Denis – 24. They haven’t even heard of this rare genetic disease. For the first time in their life young parents have faced with the real trouble, and at the same moment it has become clear to them, that Kira’s life fully depends on them.

“The doctor wrote down the name of the drug. He said if we managed to get it, conservative treatment would be possible. We found it in Poland. Three ampoules cost a thousand dollars”.

Victoria and Denis are one of the first parents that drew attention of the state to the problem of “fragile” children in Belarus. Thanks to them bisphosphonates, a class of drugs that prevent the loss of bone density, are purchased by the state.

Kira underwent a course of treatment in the National Research Center “Mother and Child”, and it was family’s first great victory. But another trouble was just around the corner: the girl broke the arm, in a week – the second one. It was unexpected: Kira’s mother just noticed that the baby couldn’t move her arm…As the doctors have explained, it happens quite often after the first course of bisphosphonate therapy.

In a month and a half they were discharged from the hospital and the parents of the child began to learn how to take care of their girl all over again.

“We were afraid of hurting our daughter, but in a short time we have learnt to kiss and hold her in arms with care”.

Denis is a real man. He has taken the responsibility for his wife and daughter. Working two jobs, he somehow manages to find the drugs Kira needs and often gets up at night to feed his daughter.

When Kira was 3 years old, she could only crawl. And most of all in the world her parents dreamt to see her first steps. When they got information about the clinic in Moscow that deals with the children with brittle bone disease for more than twenty years, Kira’s parents did everything possible to get the treatment there and managed to collect the amount of money needed.

“We got a set of exercises in the clinic that we had to do every day. Of course at first it was difficult: at the age of three Kira did not understand how important these exercises were. But after six months our girl started to stand, and even walk. We were over the moon!”

Kira’s parents say that six years of a daily struggle for the life of their daughter flew by just like one day.

“We have learned to appreciate what we have and enjoy each moment of our life, even if it seems insignificant. And now we are sure that there are many people who are not indifferent to the suffering of others, who are really willing to help. Thanks to them and of course to the charity organization Unihelp the amount of money needed for the first stage of the surgery was collected. The surgical correction, that was performed in Croatia, has helped to strengthen the bones of the girl, avoid muscle atrophy and start walking without assistance”.

Now the girl needs the second stage of the surgery: correction of the left leg, thigh and lower leg.

Kira Lameika is only 6 years old, but she has already suffered 24 bone fractures. Many problems seem small and insignificant compared to it. Kira, just like the steadfast tin soldier, keeps on struggling for her life, enjoying every day and believing in miracles.