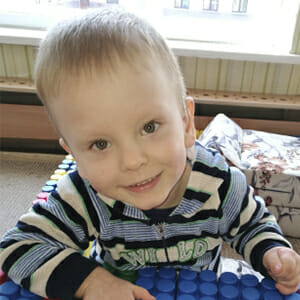 Cerebral Palsy is considered a neurological disorder caused by a non-progressive brain injury or malformation that occurs while the child’s brain is under development. Symptoms include movement and coordination problems, intellectual disabilities, seizures, problems with vision and speaking.

“We were looking forward to the birth of our son, but nobody has expected him to be born so early…

What has happened next? Frightened faces of the doctors (and there was a reason to be frightened: Pavel had two brain hemorrhages: on the first night of life, and on the third day); then the words “no one wants to find himself in such a situation. “What situation?” – I looked at my son and did not understand. He is healthy and beautiful for me, only smaller than the others”.

A week later the child was admitted to the national research center “Mother and Child”, where he was on a ventilator for one month.

Next month Pavel spent in the hospital, and the situation was slowly getting better.

“Pavel is our hero. He came through such number of difficulties, that can seem impossible even for an adult: three blood transfusions, neonatal jaundice, pneumonia, ventriculitis and retinopathy. He was diagnosed with congenital heart disease and atrial septal defect”.

At the age of three months he was diagnosed with lactase insufficiency, three months later – with sensorineural hearing loss. In spite of everything parents don’t give up.

“We give our son things of different sizes and shapes to touch, try to benefit from musical therapy and  hippotherapy. Of course we follow our doctor’s recommendations and do all the exercises”.

But the most important thing is that the situation is getting better: the child is more active, eyesight and hearing are improved.