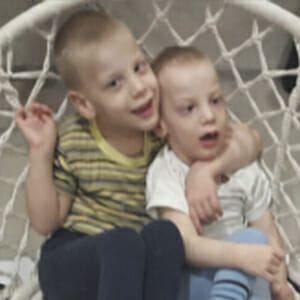 Cerebral palsy is a group of disorders that affect movement and muscle tone or posture. It’s caused by damage that occurs to the immature brain as it develops, most often before birth.

Signs and symptoms appear during infancy or preschool years. In general, cerebral palsy causes impaired movement associated with abnormal reflexes, floppiness or rigidity of the limbs and trunk, abnormal posture, involuntary movements, unsteady walking, or some combination of these.

Cerebral palsy’s effect on function varies greatly. Some affected people can walk; others need assistance. Some people show normal or near-normal intellect, but others have intellectual disabilities.

2 operations, the TURNER SCIENTIFIC RESEARCH INSTITUTE FOR CHILDREN’S ORTHOPEDICS
under the Ministry of Health of the Russian Federation

Petr and Pavel Rabiso have a cerebral palsy since birth.

There is no cure for CP, but treatment can improve the lives of those who have the condition. It is important to begin a treatment program as early as possible.

Cerebral palsy is a condition in which a child cann’t learn how to move correctly without assistance.

Peter and Pavel need urgent surgery on their legs, because due to intensive growth and high tone of muscles there are problems with hip joints. And without surgery in the near future, standing on the feet will be only a dream. It is planned to carry out 2 operations (the TURNER SCIENTIFIC RESEARCH INSTITUTE FOR CHILDREN’S ORTHOPEDICS under the Ministry of Health of the Russian Federation). The amount for two children — 9 100 USD.

« We try our best to help our sons, but it doesn’t bring the necessary result. There are two special children in our family, so my husband and I take care of children. We can’t cope without help. Despite all the difficulties, we believe in our children and love them.  Please, help us to realize our dream!,», — Olga, boy’s mother says.

Only together can we give boys a chance to have a healthy childhood!