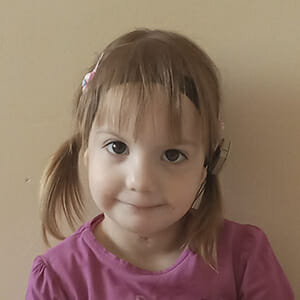 Hemifacial microsomia is a disorder where the patient’s facial features are incompletely developed on one side, resulting in eye, ear, and jaw abnormalities. When these facial abnormalities are associated with vertebral malformations in the spine and more severe involvement of the eyes, this collection of symptoms is called Goldenhar syndrome. In 85% of patients with Goldenhar syndrome, only one side of the face is affected. Because cervical spine vertebral deformities are part of the collection of symptoms, Goldenhar syndrome is sometimes called oculoauriculovertebral displaysia, or OAV dysplaysia. The syndrome was first described in 1952 by the French opthalmologist Maurice Goldenhar.

surgery (acoustic meatus reconstruction) in the clinic in Moscow

Polina’s parents were overjoyed when their daughter was born. The first days of life of the girl weren’t as rosy as young parents had hoped for.

Treatment of Goldenhar syndrome and microsomia is complex, since there are many aspects of the syndrome to manage. In addition to surgeries associated with restoring hearing, patients with Goldenhar syndrome or Hemifacial microsomia often require reconstructive surgery of the jaw and skull, specialized orthodontic treatment, and repair of cleft palates and notched eyelids.

Congenital aural atresia or canal stenosis can be surgically reconstructed once the skull has reached a sufficiently large size, generally between ages 3 and 8. The surgery has the goals of allowing proper drainage and enabling sound to reach the eardrum. In cases where the eardrum is absent, that too can be reconstructed. The surgeon drills through the temporal bone to reach the middle ear, and takes skin from elsewhere in the body to line the newly-formed ear canal.

After the detailed hearing test, hope flickered again: you can reopen ear canals. This surgical procedure allows you to improve hearing. The clinic in Moscow has already agreed to do the surgery.

«  This surgery is a chance for Polina to enjoy the most beautiful time of life, the chance to cost 32 000 EUR. We have taken advantage of all the possibilities to help our daughter. Half of the sum we collected ourselves. But alone we can’t do it.…»,—Victoria, Polina’s mother says.