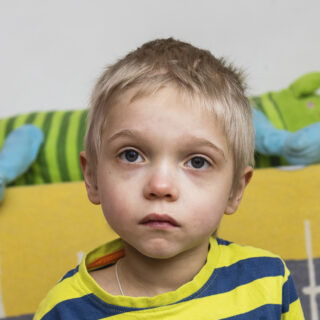 Focal cortical dysplasias (FCD) arise as a result of impaired proliferation (growth of tissues), migration of nerve cells and their organization in the cerebral cortex. Clinically, these malformations of the brain are usually manifested by symptomatic epilepsy, and, as a rule, poorly or not at all treatable with anticonvulsants.

Semyon, the third child in the family, was born without any disturbances. But at 7 months, speaking in a dry medical language, “against the background of complete health,” he began to have seizures in the form of convulsions. And from that moment on, a personal hell began for Semyon – daily multiple convulsions, prescriptions and withdrawals of drugs, an attempt at surgical treatment.

Initially, the doctors of the Republican Scientific and Practical Center “Mother and Child” in Minsk were diagnosed with “epilepsy with the presence of frequent daily serial generalized myoclonus-tonic seizures and psychomotor retardation.” In 2020, he was diagnosed with focal cortical dysplasia, underwent surgery, after which the seizures remained and became more severe.

“Now Semyon has painful seizures in the form of convulsions 12-15 times a day, there are also generalized seizures with breath holding. He lags behind in development, he does not eat with a spoon, does not talk (only “gurgles” like a baby), although he walks, smiles, laughs, recognizes faces and voices. After we went through all the possible examinations in Belarus, went through many treatment regimens, including surgery, we have only one hope left – for help abroad, in Germany,”—Semyon’s parents share.