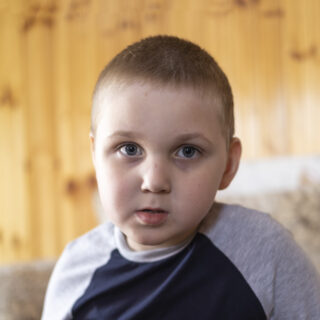 structural focal epilepsy, pharmacoresistant form, epileptic encephalopathy against the background of organic damage to the central nervous system (presumably as a result of herpes encephalitis).

Epilepsy is a group of neurological diseases characterized by the appearance of pathological foci in certain areas of the brain. These foci are manifested by neural activity, which provokes seizures in the patient. Attacks, in turn, manifest themselves in the form of convulsions, loss of consciousness, or a short-term “disconnection” from what is happening. Focal epilepsy is a form of epilepsy in which seizures occur due to the presence of a limited and well-localized area in the brain with increased paroxysmal activity.

operation at the Bethel Epilepsy Center at the Mara Clinic (Germany)

Matvey was born healthy, but at seven months the baby showed symptoms similar to a common viral infection. Soon, Matvey’s condition deteriorated sharply, and resuscitation was required. The diagnosis sounded like this: herpetic encephalitis, which led to an organic lesion of the central nervous system. The result – frequent epileptic seizures, against which medicines are powerless. Because of the seizures, the child does not speak, does not walk independently. All methods of treatment have been tried in Belarus. In the summer of 2021, Matvey became a ward of UNIHELP, and thanks to your help, already in September of the same year, he got to the Bethel Epilepsy Center at the Mara Clinic (Germany). After a thorough examination and taking into account the serious condition of the child, the German doctors recommended that he first undergo medical treatment, and a year later, make a decision about the operation. The collected funds were enough for another visit to the clinic, in November of this year.

“Every day we thank everyone who helped us. During the year of taking the drug prescribed by German doctors, Matvey began to improve, which is noted not only by us, the parents, but also by Belarusian doctors. Our son is getting stronger, he is recovering faster from seizures, which, alas, still occur daily, – Matvey Zalessky’s parents say. – A council of German doctors has established that now the child can and should undergo an operation that will remove the sources of convulsive activity in the brain. The operation is going to be difficult, but it will give Matvey a chance to get rid of the seizures, he will be able to start talking and walking on his own. Therefore, we again ask for your help in raising funds to pay for surgical treatment!”